SALEM — The Granite State Arts Academy, an arts-based charter school in Salem, was recently granted unconditional renewal by the state to continue operating for the next five years. Its leaders say the school’s model has been hugely successful, enrollment is growing and programs are expanding.
In April, the state Board of Education approved the school’s first five-year renewal since its founding in 2014.
“The first renewal is a bit nerve-wracking,” Head of School Tony Polito said.
Many charter schools have to go through a rigorous process of meeting conditions and repeat reviews, but school founder Don Erdbrink said they were relieved when the board unconditionally granted its renewal after school officials answered all its questions.
Drew Cline, the chair of the Board of Education, said the review of GSAA went smoothly in part because whenever school administrators identified an issue they appeared to proactively develop a plan to address it. He said some of the things that stood out to him included how the school sought out parent involvement and was responsive to student needs.
“That was very impressive to us,” Cline said.
During the review process, the board interviewed students and parents. He said one of the complaints a student had was that they were spending too much time away from school. Cline said that’s not something they hear often.
In an emailed statement, Department of Education Commissioner Frank Edelblut said GSAA is doing a “fantastic job” by giving students a chance to build their ideal education.
“There are many paths to bright futures, and charter schools like Granite State Arts Academy are increasingly valuable pieces of New Hampshire’s public school system,” Edelblut said.
Erdbrink estimates the school’s enrollment grew from 53 students in its first year to 108 students in the second year, then 115 in the third year.
The school moved from a 12,000-square-foot building in Derry to a 19,500-square-foot space at 19 Keewaydin Drive in Salem in the fall of 2016, ahead of its third school year, which was followed by a drop in enrollment.
“We lost some kids because of the move,” Erdbrink said.
Enrollment reached a peak of about 135 in its fourth year, Erdbrink estimates. This school year had an average enrollment of about 120 to 130 students, he said, and they are projecting 135 to 140 students to be enrolled by the fall.
Erdbrink said the school has won New Hampshire Educational Theatre Guild awards, a teacher was nominated for educator of the year and they’ve seen students get accepted to good colleges across the country.
“Though only five years old we have had students accepted to Emerson, Berklee, Harvard, Maine College of Art, Mass College of Art and Oklahoma City University just to name a few,” Erdbrink said.
He said Oklahoma City University has a major dance program that supplies many of Broadway’s dance talent.
Junior Kayleigh MacFarland, 16, has sung the National Anthem for five Celtics games at TD Garden, and other major sporting events. Another student, Alexis Clark, 19, of Atkinson, was selected to represent New Hampshire in the U.S. All-National Choir, which is comprised of one student from all 50 states plus Washington, D.C., and Puerto Rico.
But not all students who graduate from GSAA go on to pursue a concentration in the arts.
“We’re not just producing musicians and artists, we’re producing, I like to say, out-of-the-box thinkers too,” Erdbrink said.
One student, who distinguished himself as a drummer while at GSAA, got accepted into Stanford University to study robotics and embedded technologies. Another senior will be going to the University of New Hampshire’s pre-med program.
Polito said that’s a reflection of how, even as a school focused on the arts, they still take regular academics seriously. The trick is how they integrate subjects like visual arts with science and math or video production with Spanish.
Students can take up to eight arts courses over the course of four years in the school, Erdbrink said, and many of those classes weave into one another. Sewing class produces 2D visual art, and also costumes for the school’s multiple theatrical productions over the school year. Recording studios are also wired to the school’s 140-seat black box theater space.
“(The theater) was probably the largest single expenditure,” Erdbrink said of the renovation costs.
He said the school used a $600,000 federal grant to fit up the first school location and help with the move. That was also supplemented by donations and volunteer hours.
Erdbrink said the school enjoys intimate class sizes of 10 to 15 students, and its charter aims to keep those classes under 20 students. The school also requires a total of 26 credits to graduate, Erdbrink said, which is higher than the minimum 20 required by the state.
Polito said the school’s academic performance has been growing stronger. In the past three years, its students averaged SAT scores of 930 to 940, he estimated. This school year, the combined average SAT score is 1013 (530 for English, 483 for math).
Polito said they are looking into adding a number of new programs, such as photography and sculpture and rock ensemble.
“We certainly want to expand the visual arts,” Polito said.
Polito also wants to expand the existing video and film programs. Rock ensemble already has 18 interested students lined up, Erdbrink said. He said it will be a way to modernize the school’s music program, with live rock shows out in the community, while still introducing students to classical music.
One idea is to have the New Hampshire Philharmonic, currently based at Salem High School, to come to the school for small shows and to potentially provide students with internships, Polito said. 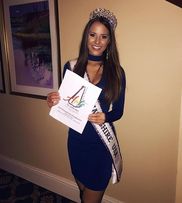 Granite State Arts Academy is a public chartered high school located in Salem, NH that nurtures creative thinkers, active citizens and independent learners with a curriculum that integrates the arts and academics. Their Vision is a high school that is dedicated to the arts that includes Dance, Music, Theatre and Visual Arts.

Granite State Arts Academy was honored to have Miss New Hampshire USA, Sarah Mousseau in attendance to co-host their event. “The arts are such a vital part of our education and this school truly champions their importance. I was thrilled to take part in this evening supporting a wonderful cause. Thank you for having me!” said Miss NH USA Sara Mousseau.

The Journalism Class at Granite State Arts Academy (GSAA) recently had their article “What’s Killing My Classmates” published in the Bangor Daily News (BDN), February 2017. The class project was inspired by Garrett’s Story, an earlier article by the News about the tragedy of addiction.

“The students did all the work,” according to Chris Michaud, Journalism Teacher at GSAA. “They did the research, outline, content writing and editing in a collaborative manner, similar to what you might find in a newsroom as a journalist.” The students interviewed journalist Erin Rhoda of the News and Michael Brindley Morning Edition Producer at New Hampshire Public Radio (NHPR) about the field of journalism.

Head of School Anthony Polito concurred. “We are so proud of our students and their ability to write about such a tough subject that affects too many young people in our society. They did a great job with sensitivity and concern about young people that are affected by addiction.” 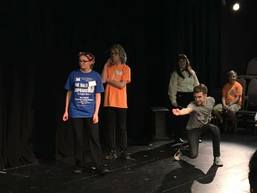 Granite State Arts Academy Hosts 2017 Regional NH Educational Theatre Guild Granite State Arts Academy, of Salem, has finally got their name out into the NH high school theatre community. For the first time on Saturday, March 25, they were a host school for the annual "NHETG Regional Theatre Festival," featuring one-act play performances by six NH high schools in a competitive event that builds towards state-level, and finally New-England-level festivals for the traveling high school shows. The NHETG (New Hampshire Educational Theatre Guild) is an organization of teachers, directors, students, and community members that has facilitated theatre festivals and theatre workshop events for high school students in New Hampshire for decades. As a 3-year-old public chartered high school, this event marked a wonderful opportunity for Granite State Arts Academy (GSAA) to join this long running tradition, make connections with other schools in the state, and raise awareness for what they stand for as an organization in the arts and education. GSAA offers all of the same core credits as a traditional high school, but also has a heavy focus on four art forms: theatre, dance, music, and visual arts.

At their regional festival this year, GSAA hosted Salem High School, Merrimack High School, John Stark Regional High School, Kearsarge Regional High School, and the Profile School for a total of six schools engaged in the theatrical fun. Students spent the day on Saturday setting up the technical elements of their shows, performing for an audience made up of their peers among the visiting schools, and engaging in structured discussion "forums" around the performances
they had viewed. Schools performed a variety of theatrical pieces with a maximum of 40-minute run times. Some schools cut down longer pieces, while others selected short plays or wrote their own. Titles of the shows performed in part or whole include "She Kills Monsters" by Qui Nguyen (John Stark), "The Bald Soprano" by Eugene Ionesco (Merrimack), "Forest of Smiles" by its performers (Profile), "The 39 Steps" by Patrick Barlow (GSAA), "The Battle of Bull Run Always Makes Me Cry" by Carole Real (Salem), and "Awaiting Patients" by Christopher Cartwright (Kearsarge). At the end of the evening, the performances by Salem, John Stark, and GSAA were selected by the adjudicators to move on to the state level of the festival, which will be on April 7th and 8th at Gilford High School, and will additionally feature shows drawn from the 3 other regional festivals from around the state this March.
NHETG Photos

Granite State Arts Academy (GSAA) is proud to announce that Jack Schneider, a Junior at our charter school was recently selected to attend the New England Young Writer’s Conference at The Bread Loaf Mountain Campus of Middlebury College, on May 18-21.

“Jack is a great writer and storyteller as many of his fellow students and teachers would attest. We are proud that Jack was chosen,” Head of School Anthony Polito said.

The New England Young Writer’s Conference is a four day workshop for high school students who are invited to participate from around the country. It’s a selective process and the writer needs to submit an original work for consideration. Only five nominations can be submitted per school and only two can be selected from any school. Jack submitted his essay titled: The Rise and Fall of Mankind.

The New England Writer’s Conference has been supporting young writers since 1983. Promising students meet with professional writers during the conference to share new ideas, new friendships, and the unforgettable experience of having been part of a community that values and supports their talents and passions.

“GSAA supports our students in their artistic pursuits,” said Polito. “We know that Jack will feel even more supported by his fellow writers, student peers, staff and family.”